This post may contain affiliate links. For more information, please read our disclaimer.

If you want to make an impressive appetizer with minimal effort, this blistered shishito peppers with burrata recipe is it! The smoky, sweet flavor of the shishito peppers and the creaminess of the burrata are leveled up even more with a delicious preserved lemon vinaigrette. Grab some toasted sourdough and make yourself a zesty bite of this appetizer!

Shishito peppers are small, wrinkly peppers native to Japan. They are mild and sweet in flavor when raw, but blister them and you'll have a delicious smoky flavor that makes them irresistible.

Although they are generally mild, they say one in ten of these small Japanese peppers will be hot. It's basically shishito roulette, you never know which one will get you!

Shishito peppers are a really great appetizer because 1. they're bite sized, 2. they have a cute, little stem that serves as a handle, and 3. they're super easy to prepare. Of course, they're delicious too.

If you're entertaining, you'll want to check out this Lebanese eggplant moussaka recipe and this dandelion greens with caramelized onions recipe. They all go great with some crusty bread as vehicles.

First, preheat a large skillet over medium heat until it's very hot. If you sprinkle some water on the pan, it should sizzle and evaporate right away.

Toss the shishito peppers with olive oil and salt then place them in the hot skillet in a single layer. Don't stir them around until they are charred and blistered on one side. This should take about 8 minutes total.

Toss the blistered shishito peppers with a portion of the dressing then place them on a platter, break up the burrata into chunks and nestle them on top, and drizzle the dressing all over.

Drizzle some olive oil on slices of crusty bread such as sourdough, and toast them until golden and crispy.

Spread some burrata with the preserved lemon sauce on the bread, then top with a few blistered shishito peppers and dig in!

If you want, you can trim off the stems of the shishito peppers before you cook them. I personally like to keep them because I think it makes them more fun.

But if you don't want to deal with having to bite the pepper off and discard the stem, feel free to chop them off in advance.

This recipe is vegetarian, but below are additional options:

Tips on How to Make Perfect Blistered Shishito Peppers

Do you need to remove the seeds from the shishito peppers?

No. Since these peppers are naturally mild, you don't need to worry about removing the seeds.

How hot are shishito peppers?

Most of the time they are mild, ranging from 50 to 200 Scoville heat units. That's much milder than jalapenos, ranging from 2,500 to 8,000 SHU. One in ten shishito peppers will be spicy. If you are sensitive to spicy food, bite off the tip of the pepper to check if it's a spicy one or not before you pop the whole thing in your mouth.

How do you eat shishito peppers?

Hold it by the stem, put the whole pepper in your mouth, and bite it off the stem. Yep, you eat the whole thing, seeds and all! Discard the stem.

What can I serve these shishito peppers with?

These are great with toasted bread or crackers as an appetizer, but they also make a great side dish for a grilled steak dinner or any other protein. You can even pile them over some tacos for a sweet and smoky flavor. Have fun with them!

Are there other ways to cook shishito peppers?

How do you store shishito peppers?

How do I store the leftovers?

The burrata should be consumed immediately after removing it from it's liquid and breaking it open. But if it's not dressed with the vinaigrette, place it back in its liquid in an airtight container and in the fridge for a couple days. If it is already dressed and mixed with the peppers, place everything in an airtight container in the fridge and consume the next day.

If you’ve tried making this Blistered Shishito Peppers with Burrata and Preserved Lemon Vinaigrette recipe or any other recipe on Forks & Foliage, then please don't forget to rate the recipe and leave a comment below! I would be so happy to hear how it turned out for you. And if you took any photos or videos, please share them with me on Instagram @forksandfoliage so I can see the deliciousness you made! 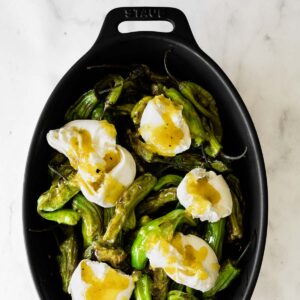 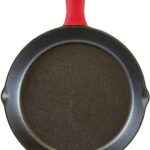 Prevent your screen from going dark

Cooking method: Make sure the pan is very hot before you add the peppers, and don't be tempted to stir them often. Leave them alone until they char on one side before stirring them. Dressing: If you don't like a lot of sauce on your food, you can use a portion of the dressing and store the rest in an airtight container in the fridge up to a week and use it for salads.  Storage: This appetizer is best consumed immediately. Store leftovers in an airtight container in the fridge and consume the next day. Please refer to full blog post for more tips and FAQ.

Nutrition information provided is an estimate and may vary.

Did you make this recipe?Mention @forksandfoliage or tag #forksandfoliage so I can see your delicious creations! And please don't forget to rate and comment below!

This site uses Akismet to reduce spam. Learn how your comment data is processed.

I'm so happy you're here! I'm Gladys - the face behind Forks & Foliage. My goal is to help you incorporate more seasonal produce into your everyday cooking while fusing them with flavors that are reminiscent of my childhood in Lebanon. So take a look around and make something delicious! I'd love to hear how it turned out for you!